Slaughter: The Horror Movie-Making Game that lets you direct your own horror movie is a game changer. 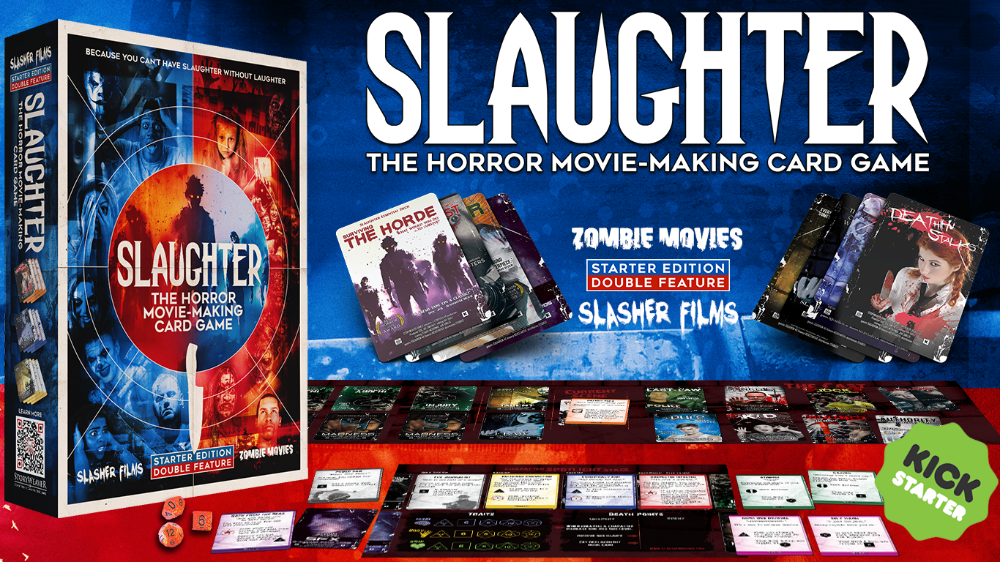 Slaughter is a unique addition to StoryWeaver Games’ current arsenal of popular tabletop RPGs. It is interesting because it is half card game, half tabletop game… all fun.

The game is improvised storytelling, with cards being used to inject characters and tropes into the movie script. One player - the Director - guides the movie using cards for scenes, special effects and hooks. The other players - Actors - take on characters cards from an available cast and add additional talent and flaw cards to drive the movie in twisted ways. Every story is unique. Every story wildly imaginative. Not even the Director knows exactly what to expect.

With Slaughter, players can create lovable, fun and flawed characters… and then take sinful pleasure in killing them off in ghastly ways. A unique Death Point mechanic rewards players for killing off their character and cast. And replacing a player's character from the cast of extras takes less than a minute.

“While most RPGs have mechanics that promote survival of player characters, Slaughter encourages players to kill off their protagonists and other members of the cast characters in brilliantly creative ways,” said Doc’ Joe Sweeney, the game’s designer. “The survivability of player characters in most horror PRGs is a problem, because that is not how horror movies work.  So we’ve designed the entire game to mimic great horror movies - from 60s Hammer Horror, to 70s Grindhouse, 80s schlock and modern franchises and remakes, and everything in between. While the game rewards players for killing the cast, they always end up with an authentic horror movie story… and maybe a surprise survivor or two.”

The game rules are simple so that anyone can play. Most of nuanced rules of the game are on the horror-movie poster themed cards, so players always know what is possible for their characters. Slaughter is perfect for introducing friends to gaming, or for getting the regular gaming gang together for an evening of murder and mayhem.

Slaughter was developed over four years with constant play-testing and adjustments to refine the game. Its public beta release was met with an overwhelming positive response at CanCon, Australia’s largest annual games convention. Watch what the players have to say about the game here.